Among deep-sea inhabitants, the Anglerfish ranks among the strangest and ugliest creatures on the planet. But in spite of its looks, it is a unique example of adaptation and survival in the most challenging of environments.

Its predominant feature is a glowing lure. It is believed that Anglerfish are among the earliest fish to have evolved bioluminescence. Their luminescent light is emitted by bacteria living inside a thick transparent fleshy growth which it projects from the top of its head.

Anglerfish belong to the deep-sea family of fish called Ceratioidei. Three genera exist – the first, Ceratias, with about 30 species, the second, Lophius, with about nine species, and the third, Melanocetus, with only one species, M. johnsonii. The only known specimen of M. johnsonii was taken from a depth of 3000 feet in 1982. All the other known species of Anglerfish are found in the Atlantic Ocean. The largest of these is C. superbus (giant angler), also known as the black sea devil, the body of which measures between 36 and 60 inches. However, despite its size, C. superbus is the most common anglerfish in the waters around the UK, particularly around the Farne Islands. 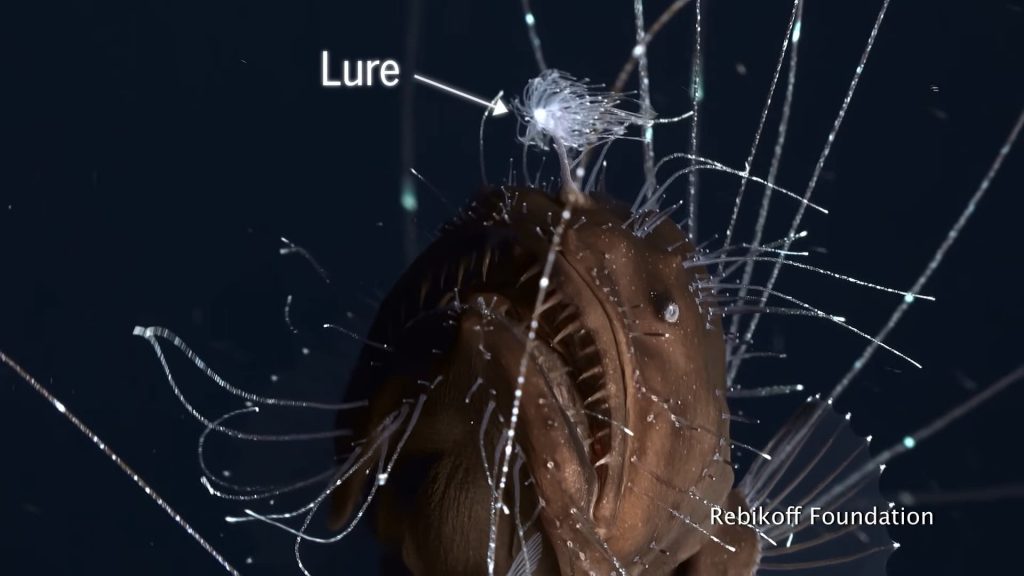 It has sharp teeth, small wiry fins and a large body. However, the most eye-catching feature is the bioluminescent lure, a highly modified dorsal spine, which is used as a lure to attract prey. It is attached to the wall of the fish’s stomach and consists of a rounded or spoon-shaped organ that is attached to the tip of a long stalk and swells into a fleshy mass. When disturbed, the anglerfish bobs the lure about, creating a flickering light that resembles a fleeing wounded fish. This attracts other prey, which, in their turn, attract the Anglerfish’s main source of food. When prey comes close, out shoots the Anglerfish’s jaws, grabs the prey and then goes back into hiding. It is believed that the Anglerfish uses the lure to attract and catch other fish. Yet apart from the lure, the Anglerfish has other fascinating features. It has an elaborate network of blood vessels, which connect with the luminescent bacteria. This allows the Anglerfish to light up when it feels like it, or when it is in danger, without using up too much of its energy. 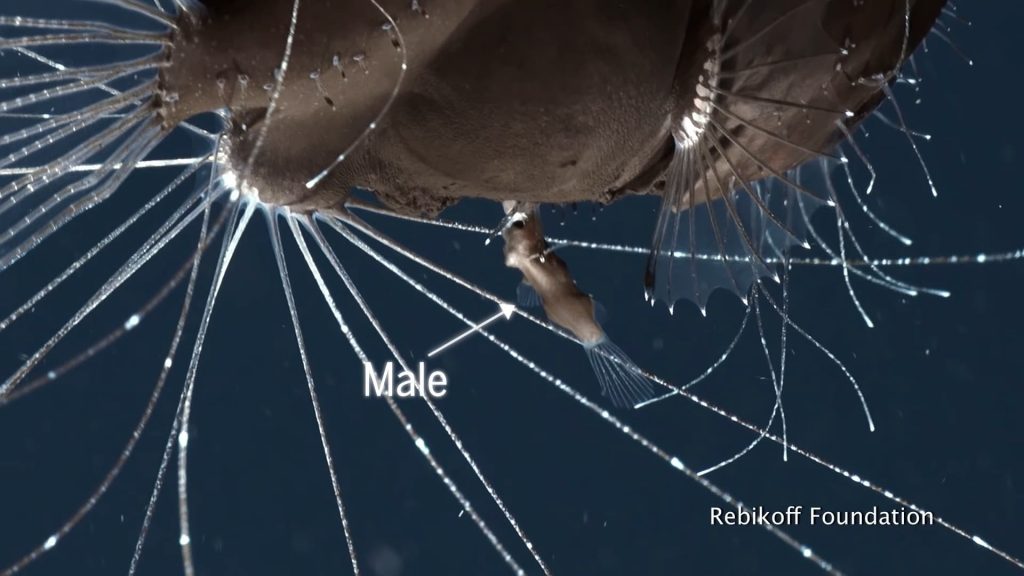 The Anglerfish has a very complex and highly specialized reproductive system. The female is a much larger fish than the male. She has two large pectoral fins that are used during mating. A mature male will attach himself to the female. There he will remain for the rest of his life, feeding off the female’s blood and living off her decaying body. The male’s sole purpose is to fertilize the female’s eggs. Anglerfish are in general a rare fish. The waters in which they live are too cold for most fish. So finding one still alive is an occasion to remember.

Where does it live?

Anglerfish live in very deep water. They prefer to live near the steep drop-off of the continental shelf or in waters greater than 6000 feet deep. This is because in such depths, no light reaches the ocean floor, thus making it an ideal environment as they lure in prey using their bioluminescent lure. In such an environment, its luminescent lure is a great advantage. It needs no day or night to attract prey or mates, as its lure can attract them at any time, day or night. Anglerfish can be found at a depth deeper than 6600 feet in the Atlantic Ocean. The true beauty of this fish lies in its ability to survive and thrive, even in waters that are too cold and deep for most other fish – a feature that makes it one of the most unique creatures on the planet. 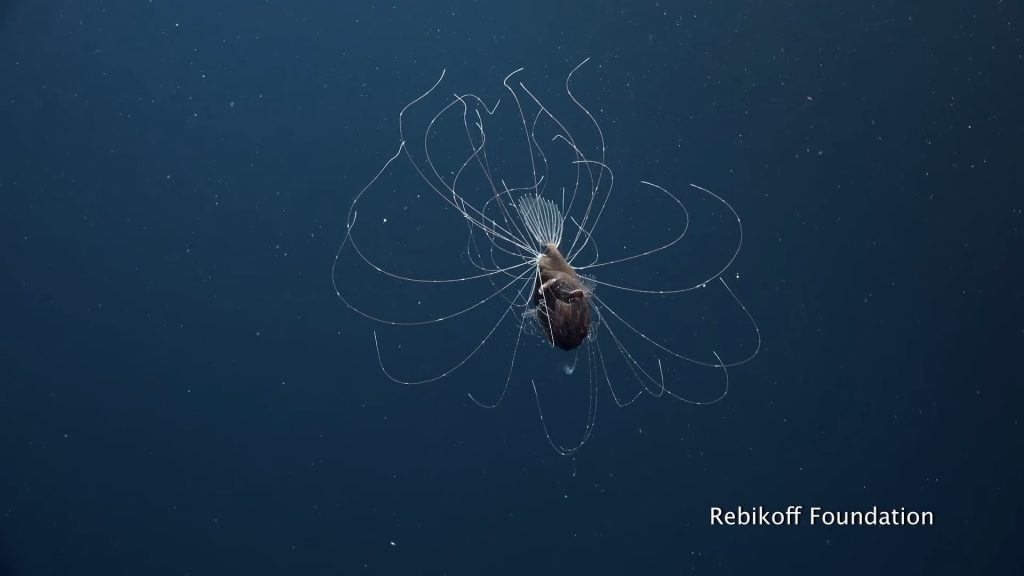 Reasons for its strangeness

The Anglerfish has some strange features which are not found in any other fish, like the lure. It has very small fins, so its movements are very slow. Though its lips are big, it has large, sharp teeth. Unlike most fish, its eyesight is poor, but its sense of smell is very acute, and it uses it to hunt for its prey. However, the predatory behavior of the Anglerfish is often the reason for its own death. The Anglerfish doesn’t have a swim bladder, which helps most fish to maintain buoyancy. Thus it can easily get weighed down by the lure, and have to wait for prey to come to it. But the Anglerfish has a solution for this too. It has a bioluminescent bacteria which give off light when it’s disturbed. Thus it can light up to flash in warning to would-be predators.

What does it eat?

How fast is it?

The Anglerfish has small fins, and it cannot swim fast. When threatened, it will flash its light for a tenth of a second as a warning to predators. Then it will swim down to a safer depth, where it can glow its light without being seen.

How much can it grow?

What is the future of the Anglerfish?

The Anglerfish faces no threat from human activities. The oceans in which it lives are too deep for trawling or the use of nets.

Its future is in its own hands. The Anglerfish has a complex reproductive system. The female is much larger than the male, which attaches itself to the female when it is mature. There it remains for the rest of its life. The males are used only to fertilize the female’s eggs. This process is quite slow, which means that not many young will be produced. This system ensures that the species will survive only if the females are not disturbed and no males are taken away from them. Also, natural selection should ensure the removal of the unfit. The Anglerfish has very good sense organs and can adapt to changes in the climate.

Therefore, there is a good chance that the Anglerfish will continue to survive, despite the fact that it is relatively slow, and cannot swim fast.

No, they are not. Anglerfish are found in the Atlantic Ocean. There are no threats to their survival from human activities.

What makes it famous?

The Anglerfish is famous for its bioluminescent lure and its bizarre look.

What role do they play in the ecosystem?

Anglerfish are carnivores. They eat small fish, which help maintain the balance in the ecosystem.

What impact do they have on human life?

Anglerfish are bottom dwellers, and have no impact on human life.

What is the coolest fact about it?

The Anglerfish has a luminous lure which is the earliest example of bioluminescence among the vertebrates.

Does it have any cultural references?

The Anglerfish is a popular cartoon character and was seen in the movie Finding Nemo.